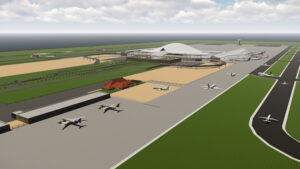 North Bali International Airport (Bali Buleleng Airport) is a new airport development project that will provide the Indonesian island of Bali with a second commercial airport. The airport is being built to ease the growing congestion at the current Denpasar Airport.

The new North Bali Airport will be located north of Denpasar, in the Kubutambahan district of Buleleng Regency. A train line will link the two airports. The development will feature two runways. The project is scheduled to be completed by 2024.

A chronology of recent years over the never-ending story of a Bali Buleleng Airport (at various proposed locations along the North Bali coast) to give some “boost” to land prices in Bali’s northern areas. The “North Bali Airport Story” began in 2007 with an announced new international airport in the Jembrana Region without an airport project ever being started anywhere.

January 11, 2022
The construction of the North Bali International Airport (BIBU) initiated by PT BIBU Panji Sakti will soon begin, and with Chinese help.
According to Kompas, the construction of the airport involves a subsidiary of the state-owned China State Construction Engineering Corp. Ltd (CSCEC), namely the China Construction First Group Corp. Ltd. (CCFG).
If the construction is carried out immediately this year as planned, it is targeted that the airport will be operating in 2024.
The cooperation between the two companies was marked by the signing of a Memorandum of Understanding (MoU) between CCFG and PT BIBU on December 29, 2021.
President Director of PT BIBU, Erwanto Sad Adiatmoko Hariwibowo said the signed MoU contained an agreement between the two parties to jointly build the international airport in Kubuaddan, Buleleng, Bali. A previous, initial commitment was signed by the two parties on August 7, 2020.

“CCFG will be the main contractor in the construction of this international airport,” Erwanto said in an official statement.
The construction of Buleleng airport is in anticipation of the increasingly limited capacity of Bali’s I Gusti Ngurah Rai Airport in the south of the island and especially post-Covid-19 pandemic. Moreover, the Ngurah Rai airport only has one runway.
Meanwhile, CCFG Chief Representative for Indonesia, Sun Kelin confirmed his readiness to fund the BIBU development as a turn-key project.
“We are ready to help realize the airport that the residents of North Bali dream of,” he said.

To note, CCFG’s parent company, CSCEC, is one of the largest SOEs in China, which has a track record in financing and development in the construction sector. This company has a wealth of experience in handling large development projects in China and in various places abroad.
Meanwhile, PT BIBU is the main local overseer of the airport construction project, which is located off shore and located in the Kubuaddan area, Buleleng Regency, which is in accordance with the Regional Regulation (Perda) of the Province of Bali Number 3 of 2020 concerning Regional Spatial Planning (RTRW).

TheIndonesia.id – PT Waskita Karya (Persero) Tbk hopes that North Bali International Airport (BIBU) project will improve the economy in the northern part of Bali and its surroundings.
“With the collaboration between Waskita Karya and BIBU Panji Sakti in building this North Bali International Airport, I hope it creates synergies to build new infrastructure projects that can improve the economy and tourism in northern Bali, which so far have not been maximally developed,” said Waskita Karya President Director Destiawan Soewardjono, last Monday, December 20, 2021.
Destiawan said the new airport would certainly benefit the people of Bali as well as Indonesia. Meanwhile, President Director of PT BIBU Panji Sakti Erwanto Sad Adiatmoko Hariwibowo welcomed the collaboration with Waskita Karya.
“I hope that the collaboration that we signed together can pursue the dreams of the Indonesian people, especially the people of northern Bali. Currently, development in Bali is faster in the southern part. And, we have a tagline to build Indonesia from northern Bali. Hopefully, with the construction of the Bali International Airport In the north, we can balance the economy between the south and the north,” said Erwanto.
North Bali International Airport, located in Kubutambahan, Buleleng, is one of the national strategic projects based on Presidential Decree No. 109/2020. The project is in line with the Bali Provincial Regulation No. 18/2009 concerning the RTRW, which was later updated with the Bali Provincial Regulation No. 3/2020, which among other things stipulates the designation of the Kubutambahan area as an airport location.
Buleleng community leader, Nyoman Shuida, was delighted with the signing of the Waskita-BIBU memorandum of understanding. “This is the first step to develop an international standard airport in Buleleng. The presence of the airport will not only raise the welfare of the residents of northern Bali, but also have an impact on national development,” said Shuida.

The airport construction in northern Bali will close the gap in the economy and increase the Balinese welfare, considering the residents of northern Bali are relatively left behind from the citizens of the south. “So far, every day there are hundreds of workers from northern Bali flocking to southern Bali to earn a living,” he said.
North Bali Airport 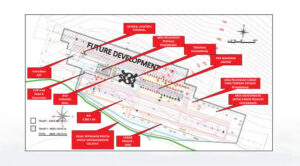 Jan-2021. PT BIBU Panji Sakti posted news reports stating the company and China Construction First Group (CCFG) signed an MoU to develop Bali Buleleng Airport. CCFG will be the main contractor of the airport project, which will require around IDR50 trillion (USD3.5 billion). Indonesia’s Ministry of Investment received a feasibility study and business plan for the airport and will accelerate its development, with an aim for it to be completed by 2024.

Mar-2018. Indonesia’s Ministry of Transportation stated it will not prioritize the development of a new offshore “floating” airport in Bali. Minister of Transportation Budi Karya Sumadi added the government’s preference is to upgrade existing facilities and construct a second runway at Bali Denpasar Ngurah Rai Airport. The new airport has been proposed by Bali’s provincial government and regional business groups.

Sep-2017. Buleleng Regent Putu Agus Suradnyana stated the government will fully support any company with serious intentions of developing Bali Buleleng Airport, warning against companies with ulterior political motive. The airport development project is estimated to require IDR50 trillion (USD3.7 billion) with land acquisition to commence before the end of 2017.

Jun-2017. Bali Vice Governor Ketut Sudikerta stated the council received two EoIs to develop the proposed Bali Buleleng Airport . The government hopes both parties can collaborate and work together on the project, with Mr Sudikerta saying both companies are willing to commence construction before the end of 2017.

19-Apr-2017. Bali Buleleng Airport president director Made Mangku announced ground breaking of the airport development project is scheduled for 28-Aug-2017, provided there are no further delays. The entire development project is estimated to require IDR50 trillion (USD3.7 billion), with IDR6 trillion (USD451 million) allocated for land reclamation which will be the platform for the two runways.

18-Apr-2017. Indonesia’s Ministry of Transportation completed surveys on two potential sites for Bali Buleleng Airport. The Ministry aims to recommend a site in the North of Bali, which will then be followed by an economic feasibility study.

Jun-2016. Bali Buleleng Airport consultant Airports Kinesis plans to break ground on 28-Aug-2016. Bali Governor Made Mangku Pastika stated the project is pending confirmation from the Ministry of Transportation in regards to the location. Three sites were identified in the recommendation letter which includes proposal for two runways.

23-May-2016. Sakae Corporate Advisory signed a MoU with Pt Baruna Indonesia and Buleleng Regency to boost tourism in North Bali by improving air and sea transportation access to the region. According to PT Baruna Indonesia president director Eddyarto, the MoU includes upgrading “the existing airport to accommodate bigger airplanes” such as Boeing 737-800 or similar for charter flights and private jets. First phase of development include constructing a private jet parking area and a first class transit hotel, expected to cost USD55 million.

11-May-2016. Bali Governor Made Mangku Pastika reported Airport Kinesis commenced pre-feasibility studies for the new North Bali Airport . The Governor said “this is just the beginning” for the IDR30 trillion (USD2 billion) project, however he forecast the airport will be operational by 2021. 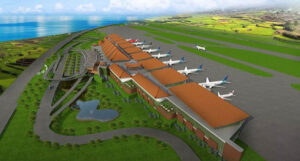 13-Jul-2015. PT Angkasa Pura I (API) is prepared to construct the New Bali Buleleng Airport, following reports the state-owned enterprise was appointed to undertake the project.

President director Sulistyo Wimbo Hardjito said API will undertake a financial analysis of the project and will commence construction works, following the feasibility study. The activation of a feasibility study will be subject to confirmation from the Ministry of State-owned Enterprises, according to Mr Hardjito.

May-2015. Bali’s new second airport could reportedly be constructed as a floating airport off the coast of Buleleng according to plans from a consortium of Canadian investors. The consortium reportedly plans to construct the new airport on top of floating concrete piles, featuring a 125m bridge connecting to the two-runway development. The project is reportedly expected to cost IDR30 trillion (USD2 billion).

Jan-2015. Bali’s Government plans to construct a new airport in Buleleng, as stated by the head of planning and regional development Putu Astawa. Mr Astawa advised that the country’s Ministry of Transport has reportedly directed the Ministry of State-Owned Enterprises to include the project in the National Medium Term Development Plan (RPJMN). According to Mr Astawa, its inclusion confirms the development will be covered under the country’s state funding program..

Looking for a beautiful villa with sea view in North Bali? 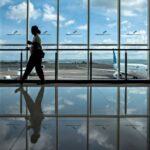 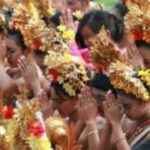